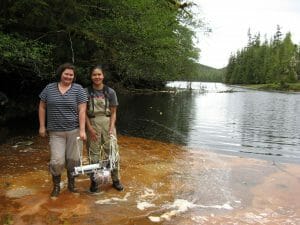 Close your eyes. Clear your mind.

When you hear the word ‘scientist,’ who do you envision?

If those are the words you used, you’re just like the kids in Hydaburg City School District used to be. That is, before they met Wendy F. Smythe and learned a new way to think of themselves and to value their traditional knowledge.

Smythe is Haida of the Eagle Moiety and of the Sdast’ aas (Fish Egg) House, a Sealaska shareholder and former Sealaska scholarship recipient. She spent most of her childhood in Hydaburg before moving away to Ketchikan as a teen, then left Alaska to pursue her education. Today, she holds dual doctorate degrees in estuary and ocean systems, and environmental science and engineering, and is an assistant professor at the University of Minnesota at Duluth with a joint appointment American Indian Studies and the Department of Earth and Environmental Sciences.

For the past 13 years – while she was working toward her degrees, involved in education policy in Washington, D.C., and now teaching in Minnesota – Smythe has returned to Hydaburg several times a year to do hands-on science work with Hydaburg students in grades 5 through 12, during the school year or as a volunteer during Hydaburg Cooperative Association’s annual Culture Camp.

Working with Smythe, the students are actively monitoring water quality in river and coastal ecosystems near Hydaburg, instilling a sense of responsibility for their surroundings and an understanding of the impacts of industrial activity. Students gather data and track changes from year to year, reporting findings to the tribe. Smythe tailors lessons to students’ ages, focusing on concepts like dependent and independent variables with the younger kids, and anatomy and physiology, evolution, and environmental science with the older ones. She’s currently designing a curriculum that ties standards-based science lessons to traditional stories, like the Haida creation story about raven opening a clam shell.

“This is the place-based, culturally aligned science that I love,” Smythe said. “(Hydaburg) is the environment that made me the scientist I am, jumping off the dock, hunting for mushrooms, hunting for berries.”

In the 10 years preceding Smythe’s science teaching program in Hydaburg, 19% of Hydaburg High School students went on to college or trade school. From 2008-2018, during the first 10 years she was working with local youth, that number jumped to 68%. 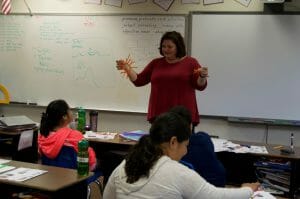 Smythe started her program with two years’ worth of visits with local Elders to hear their priorities for the children’s educations. Many shared stories of being shipped off to boarding schools, where they were punished for speaking their language and separated from their families and communities. For many, Smythe said, Western-style education equates to trauma.

Although her own journey was different, Smythe said she can definitely relate. Working as a American Association for the Advancement of Science fellow at the National Science Foundation in Washington, D.C., “I had a lot of racism exhibited toward me. They didn’t know I was Native and they would say things,” she said.

“But don’t worry,” she laughed. “I’m Haida. They learned.

“My worst fear is encouraging (young people) to go to college and then having them experience some of the things I’ve seen and heard. Changing experiences along the pathway is my biggest goal.”

Smythe started out her teaching project in Hydaburg by bringing in non-Native policymakers and scientists to work with her in hopes of doing just that – clearing up misperceptions and smoothing the way for college-bound Native students.

But after a few years of that, one day she asked the students to close their eyes and describe what a scientist looks like. They all used the same 6-7 words to describe a stereotypical, zany old white guy in a lab coat.

“Not one of them said Native,” she recalled. “Not one said female, and at the time, our student body was about 60% female. I realized I had done a disservice. I had not brought any Native scholars with me.”

So instead she started working on changing the way students see themselves. She brought Native scientists, engineers, teachers and cultural practitioners, many of whom were women, to help teach instead. 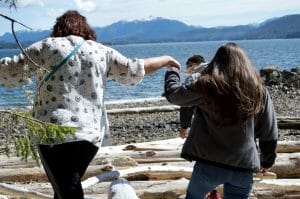 After one year, the list of most frequently cited adjectives expanded to 19. More meaningfully, among the descriptors were things like,  “Native”, “respect” and personal descriptors such as ‘curly hair,’ ‘short,’ ‘tall.’