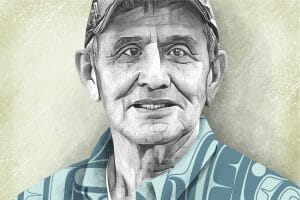 In celebration of Native American and Alaska Native Heritage Month, we are recognizing shareholders who have served in the Armed Forces as part of our #RecognitionMatters Veterans Campaign.

Today, we recognize U.S. Army combat veteran Fred Peratrovich. Peratrovich was awarded the Army Commendation Medal for his service in the Vietnam war in 1968-1969. This honor is bestowed upon those who distinguish themselves by heroism, outstanding achievement or meritorious service.

American Indian and Alaska Native people have a longstanding tradition of service and sacrifice, as they serve at a higher rate than any other demographic in the entire country. As a country, we take time every November to honor U.S. military veterans. This November, Sealaska is honored to recognize veterans who we all keep close to our hearts – a few of the incredible Alaska Native Veterans in our community of shareholders.

Peratrovich is the son of Thompson and Audrey Peratrovich of Klawock, AK. He is Tlingit, Raven, Frog.

Peratrovich flies the American flag on Veteran’s Day in his home community of Klawock. The community counts on him to step up to carry the flag in ceremony whenever needed. His contributions as a community member, though, go even further.