The 47th annual meeting of Sealaska shareholders featured record-breaking news for the company. The election of three women to the board of directors means that, for the first time ever, women make up the majority of board members. The company also announced record financial performance, which enabled significant growth in shareholder distributions and investments in community priorities such as language revitalization, education, and cultural and economic opportunity.

The meeting was held yesterday (Saturday, June 27) via webcast from Juneau, Alaska. Four directors were elected for three-year terms that will expire in 2023. Three of the new directors (Lisa Lang, Angela Michaud and Karen Taug) will be serving for the first time on Sealaska’s board. Morgan Howard, who was previously elected in 2017, will begin his second term. The four candidates will immediately begin serving their terms.

“Today is a good day. Our shareholders are engaged. Our governance system is working, as evidenced by the turnover on the board and the quality of our candidates,” said Sealaska Chair Joe Nelson. “On behalf of the board, I thank all of our shareholders for your continued support of Sealaska and your continued commitment to helping us shape a positive future together.”

A record number of shareholders participated in this year’s election with 1,431,862 shares voted, representing 67.98 percent of outstanding shares of Sealaska voting stock. This year’s ballot included one resolution, which would have limited board terms to a maximum of four.

“This is a historic year on a number of fronts, from the number of independent candidates who ran, to the record voting turnout, to the fact that women now outnumber men on the board,” said Sealaska Vice Chair Jodi Mitchell. “Our shareholders engaged in healthy debate and dialogue on social media throughout the campaign. I want to thank all the shareholders who made their voices heard with their votes, and all the candidates for their willingness to serve the shareholders of the company.”

With the election of Lang, Michaud and Taug, the board now comprises seven females and six males. For a complete list of the 13-member board of directors, see below.

Sealaska achieved another year of record ﬁnancial performance, with $77.8M in net income and $700M in total revenues. Sealaska’s 2019 revenue of $700M is the largest in Sealaska’s history. Operations and investments are the primary sources of Sealaska’s gross revenue. Every operating business delivered signiﬁcant year-over-year growth.

Shareholders voted on a proposed resolution that, if approved, would have amended the Sealaska bylaws to establish a maximum of four terms served for Sealaska directors. The resolution sought to amend the bylaws and, in order to do so, it needed to have an affirmative vote of the majority of all of the outstanding voting shares. There were 2,106,145 outstanding shares of voting stock; therefore, the resolution required 1,053,073. Shareholder Leilani Wilson Walkush submitted the proposed resolution.

Current board of directors following 2020 election: 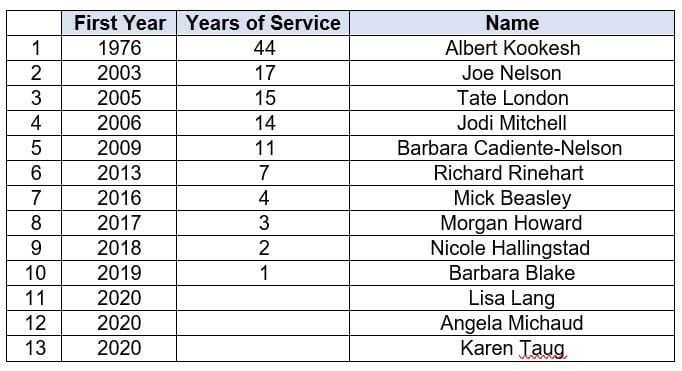 Get to Know Sealaska Shareholder and CCFR Captain Jayme Johns

#SealaskaWayOfLife Contest a HUGE Success Because of YOU!

Get to Know Sealaska’s New Board Youth Advisor Michaela Demmert