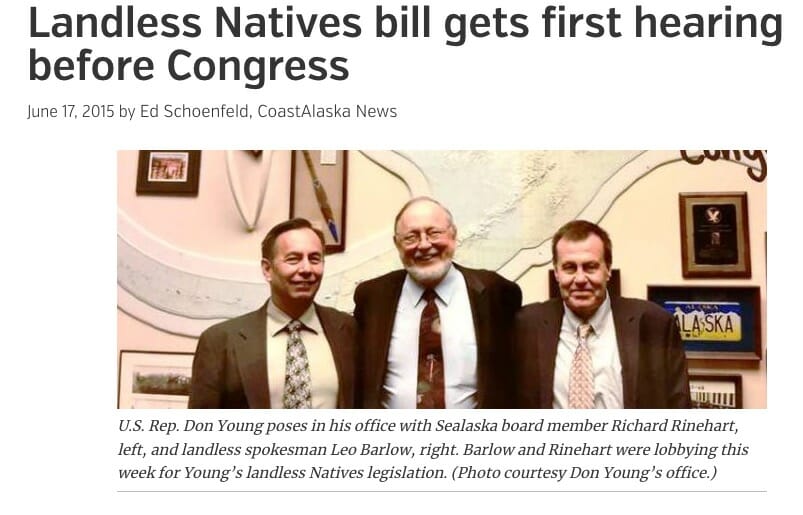 Sealaska was saddened to learn of the passing of Alaska U.S. Representative Don Young, and would like to extend our deepest and most heartfelt condolences to his family, friends and colleagues. Congressman Young served our state since 1973 and has been a staunch and loyal supporter of Sealaska and our Alaska Native community over the years.

Congressman Young was a tireless advocate on behalf of Sealaska’s “landless” communities over many decades. Five southeast communities were left out of the Alaska Native Claims Settlement Act, therefore losing the opportunity to form ANCSA urban corporations.

Congressman Young repeatedly introduced legislation to rectify this injustice, and was a hands-on participant in the process of identifying land selections and negotiating with other parties in the process. He was also vital in helping secure passage of the Sealaska Land Entitlement Legislation.

“Don Young was a true champion of Alaska. Just two weeks ago, he hosted a roundtable of his colleagues on the House Resources Committee specifically to showcase the Alaska Native Claims Settlement Act on the 50th anniversary of ANCSA,” said Sealaska Chair Joe Nelson. “We were looking forward to his visit back home this week. Just as importantly, we know he was looking forward to his visit with us.”

As Alaska’s only representative to the United States House of Representatives, Congressman Young’s contributions to the state of Alaska and its people span nearly five decades of passionate and unwavering support for the citizens of our state. His advocacy and insight will be sorely missed.